Why do stupid Democrats “admit” that Trump’s economy is “strong”, while it was Barack Obama who recovered the economy from Bush 43’s crisis? *** How the Democratic presidents, time and time again, recover the economy from troubles created by the Republican ones

A word about myself

I am not an economist, I’m but a common lawyer and an unpaid journalist who owns a website that holds almost 5,000 articles and a few hundred articles here and there – most of them are mine.

Lawyers and journalists have at least one thing in common: they push their noses to other professionals’ jobs. It isn’t chutzpah, it’s just how the human society defined their scope.

Just for instance: if a surgeon forgets a coffee-maker in the patient’s belly, the lawyers and journalists will grill him, albeit they have no expertise in medicine.

In this article I just pick and interpret what I find on my way, and – when necessary – if I say “I guess”, “I assume”, “supposedly”, etc., it means that I guess or assume, etc., and please don’t catch me by the word (by the way: in Hebrew the word “word” and the word “circumcision” are homonyms).

A word on demagoguery

One of the incarnations of demagoguery is manipulative use of true facts. it’s more than just “misleading”, it’s stuffing one’s brain so that one can’t grasp how he, or she, is lead astray.

The unemployment rate fell to 3.7 percent in September 2018, its lowest level since 1969, and President Donald J. Trump brags and takes fatherhood over this true fact, though, as we’ll see here, it’s his predecessor, Barack Obama’s, achievement, who pulled this country out of the Great Recession created by his predecessor, Trump’s “compartisan”, Republican former President George W. Bush.

Furthermore, we’ll see how, over and over again, Republican presidents raise the joblessness, and Democratic presidents bring the recovery, and it’s pretty sure that Donald Trump will not be an exception – especially if he is reelected to a second term.

And the Democrats – how stupid! – “admit” that “the economy is strong” …

Trump is not alone

The unemployment rate fell to 3.7 percent in September, its lowest level since 1969, the Labor Department reported Friday. President Trump quickly celebrated the news on Twitter, and many forecasters predict the jobless rate will decline even more in the months to come.

Sorry, Mr. President, sorry “many forecasters”: though the facts are true, you have nothing brag about, because it is not the economy, stupid, it is the politics!

Look at this chart (Source):

Starting President Harry Truman (D, 1945-1953): The graph we have doesn’t go back to the beginning of his tenure, but in his first term the unemployment rose to 7.9% (source of this and the following data), supposedly because of the GI’s coming back home from WWII, and then the unemployment declined to 2.6%, with the momentum continuing to the beginning of the term of President Dwight Eisenhower (R, 1953-1961).

In Eisenhower’s tenure the unemployment fluctuated up and down, to about 7.5% and ended at 7.1% – 4.5 percentage points net rise in unemployment above his starting point (again, with the momentum continuing to the beginning of his Democratic successors, Presidents John Kennedy and Lyndon Johnson (D, 1961-1969 – I regard them as one presidency).

The “seam” between the Kennedy-Johnson and the Nixon-Ford presidencies shows nine (!) consecutive months (Sep. 1968 – May 1969) of 3.4% unemployment – 3.7 percentage points net decline in unemployment.

The contribution of Bush II to the unemployment is, therefore, 5.8 percentage points net rise.

President Barack Obama (D, 2009-2017) started the recovery at 10% unemployment, and with the same momentum into President Donald J. Trump’s presidency, lowered the unemployment to 4.3% – net decline of 5.7 percentage points.

Taking into account the average “performance per year”, we have 0.386 percentage points average rise in unemployment per year under Republican presidents, against 0.436 percentage points average decline in unemployment per year under Democratic presidents, which means that the Democratic presidents have built, each average year, significantly more than the Republican presidents have destroyed, each average year.

The above chart and calculations show that as regards the unemployment neither Trump nor the Republican Party have anything to brag about.

I’m pretty sure that the same approach to the other parameters will yield similar results.

Now, as we already know, Trump’s contribution to the decline in unemployment is almost zero – if at all – the next step is to assess the future of his economic “achievements” from now on.

As we’ve seen above, “many forecasters predict the jobless rate will decline even more in the months to come”, and the first question is how far can it decline, when the zero-line is so close, and as I said above, regarding Reagan’s performance, “when you are high you can but go low (and vice versa).

My guess is that the unemployment will not fall below 3.0%, but, more likely, it will rise to 4-5% by the end of Trump’s first term, and – God forbid! – rise much higher if he is re-elected for a second term (see my red graph on the chart).

As I said above, I am not an economist, but when it happens – just remember that I told you.

A picture is worth a thousand words

The Democratic campaigns spend much money for ads, but you can’t bypass Trump’s demagoguery – he is the greatest demagogue of this age – maybe of all ages.

accompanied by 5 to 10 seconds of verbal gist of this article will do much more for much less.

And, as to Trump’s MAGA, should take another answer:

And since Trump can’t help mentioning Brett Kavanaugh, here is a “bonus”: 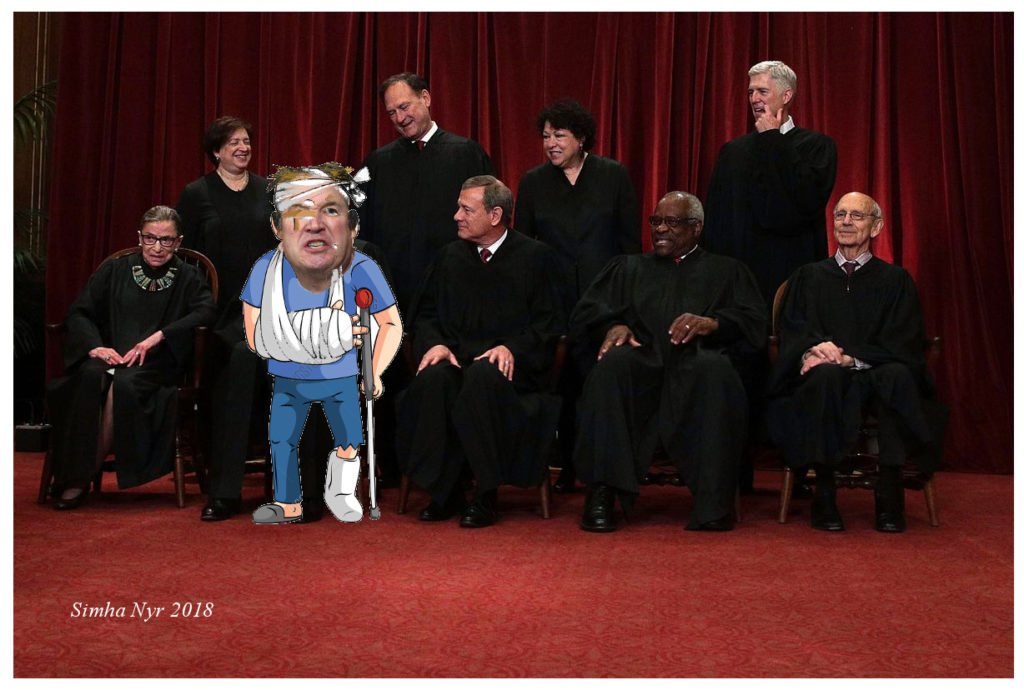